Robert Clark is a patient on the Oswald Asylum. It is unknown why he's a patient in the asylum, and for what's shown appears to only have minor behavioral abnormalities that could simply be playfulness (him trying to attach paper on the television and talking in a funny way). It could even be that his odd behavior only occurred after the failed lobotomy.

Robert is an obese kid with a green shirt, blue-green pants, and orange hair partially shaved off, revealing a scar on his head due to an incomplete and failed lobotomy.

Under the effects of Duotine, Fran sees him as a shaky, corpse-like version of himself with no eyes and a sewn-shut mouth, before his head explodes, leaving his neck gushing blood like a fountain.

Not much is known about Robert's personality, apart from that he's somewhat playful, talking in a playful way, and attaching paper to the television. 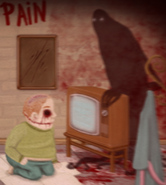 Robert in the demo version, shown in a room with Damian.
Add a photo to this gallery
Retrieved from "https://fran-bow.fandom.com/wiki/Robert_Clark?oldid=11815"
Community content is available under CC-BY-SA unless otherwise noted.