Philmore Bronstone (simply referred to as Phil) is one of the patients of the Oswald Asylum. He shares a room with Fran in the asylum.

Phil is an 8-year-old boy with short brown hair and dark eyes. He has a very pale look due to being constantly paranoid.

A rather quiet and glum-looking boy, it's stated that Phil suffers from paranoia. He appears on somewhat friendly terms with Fran, but it leaves this to be questioned during their last encounter when he locks her inside the office.

Phil in his room 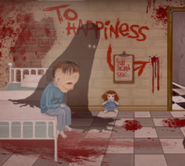 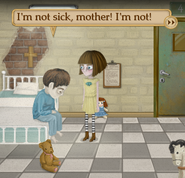 Add a photo to this gallery
Retrieved from "https://fran-bow.fandom.com/wiki/Philmore_Bronstone?oldid=12354"
Community content is available under CC-BY-SA unless otherwise noted.