Martin Bow Dagenhart is Fran’s late father. He died alongside his wife Lucia in their bedroom after being dismembered.

Martin is shown in a family photo early in the game. In the said photo he is shown to have either brown or black hair and wears simple clothing, dressing only in a white button-up shirt and a pair of dress pants of an unknown color.

Almost nothing is known about Martin's personality, though Fran seems to remember him as a kind and loving father. However, when under the effects of Duotine while in the asylum, there is scrawled on a wall that says "Daddy was not there, Mommy would not care." If this text relates to Fran at all, it might suggest that Martin wasn't very present in his family's life, or that he and Lucia were going through marital issues.

This theory remains unproven, and even if Lucia and Martin had some marital issues, Fran was completely oblivious, and Aunt Grace likely would've mentioned it during Chapter 5 to torment Fran internally. 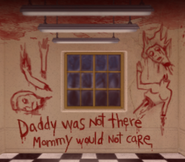 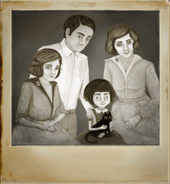 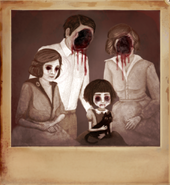 Fran's family portrait corrupted
Add a photo to this gallery
Retrieved from "https://fran-bow.fandom.com/wiki/Martin_Bow?oldid=11911"
Community content is available under CC-BY-SA unless otherwise noted.