Mabuka or Mother Mabuka, widely feared ruler of the Fifth Realm, is "the end of light", a being of darkness representing and subsisting on anguish and despair. She sleeps at the center of a mysterious and expansive place called Mabuka's Den, and can only be awoken by the Ekog, a special clock conceived by Cogwind.

Mabuka is the mother of Remor, Prince of Darkness, though beyond this fact the nature of their relationship is not entirely known. Mabuka acts much less outright malicious than Remor, who actively haunts human beings.

Mabuka is omniscient and can create monsters at will. She is also capable of possessing humans at will, as seen in her possession of Dr. Marcel Deern towards the end of the game. 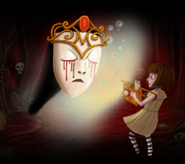 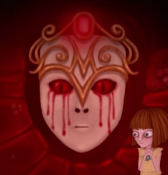 Mabuka with her eyes open
Add a photo to this gallery
Retrieved from "https://fran-bow.fandom.com/wiki/Mabuka?oldid=12268"
Community content is available under CC-BY-SA unless otherwise noted.