Jason Cogh is one of the patients at Oswald Asylum. Not much is known about him, apart from that he was moved upstairs with the more functional children after the doctors declared him better. That said, Jason appears distressed, rocking back and forth, and even pleads for Fran to kill him.

Jason is a child of an unknown age. He has brown hair, a blue shirt, and yellow pants. He has sickly pale skin, and carries a mask similar to that of the murderer Jason Voorhees.

Jason is very quiet and not much for talking, and appears very distressed and serious. He asks Fran to kill him, and if she complies, he thanks her and says he can't talk any more now that he's dead, likely because he wanted to avoid talking in the first place. 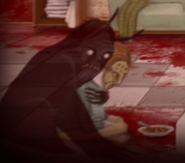 Add a photo to this gallery
Retrieved from "https://fran-bow.fandom.com/wiki/Jason_Cogh?oldid=11813"
Community content is available under CC-BY-SA unless otherwise noted.