Isabelle is one of the child patients in the Oswald Asylum. Not much is known about her, apart from the fact that part of her treatment includes heavy sedation. Upon encountering her in the game, she appears to be completely unconscious, lying as if dead in the television room's armchair. Fran seems to be aware that Isabelle is not just sleeping but actually drugged.

Under the effects of Duotine, Fran sees Isabelle as a skeletal version of herself, being gently stroked by the shadow watching over her. This could symbolize Isabelle being sexually abused by a parent or a familiar adult with authority. Despite Fran's attempts, Isabelle won't wake up. 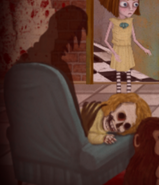 Add a photo to this gallery
Retrieved from "https://fran-bow.fandom.com/wiki/Isabelle?oldid=11814"
Community content is available under CC-BY-SA unless otherwise noted.