Dr. Oswald Harrison is the founder of Oswald Asylum and a highly recognized psychiatrist, specializing in twin studies and experimenting on those who can perceive the other realities. He is the main antagonist of Fran Bow, though he is only seen in portraits and pictures until the final chapter.

For his in-person appearance, Dr. Oswald appears as a man in his late 80's. His hair, including his beard, mustache, and eyebrows, has turned white with age. He wears a reddish brown coat with a pale blueish-green undershirt and pants, as well as a pair of brown slip-on shoes.

In the old photo of him alongside several other characters (see the image gallery on this page), his hair is visibly darker, likely brown or black in color. He wears a white lab coat and undershirt along with dark pants and shoes.

In either appearance, he is seen using a wheelchair.

Not much is known about Dr. Oswald Harrison's personality, but he seems to be very into his work. He will do anything to complete his tasks, even murder. He has partnered with Grace, Fran's aunt, to continue his studies on Fran and those who can see the other realities. From his actions, it can be inferred that Dr. Oswald is very ambitious and driven, if not a bit mentally unstable himself. His motivations in the game seem to be directed towards gaining knowledge as opposed to fame or fortune, as he never mentions his discoveries pertaining to twins to have given him a great deal of recognition yet doesn't seem to mind. However, we can also assume he is vain to an extent as he displays pictures of himself throughout the asylum in addition to naming it after himself. He also could be considered very cold or even cruel as he has no qualms with murdering people to get what he wants, including children and his own patients and employees (as we can see he had Dr. Deern constrained to a shock therapy chair and would perhaps have had some unsavory plans for him had Fran not intervened). He is very manipulative as seen through several points in the game: him getting Fran's nurse to claim that she was deceased, despite the nurse knowing that was not the case, getting Fran's drugs switched to a higher dosage or perhaps dangerous version of Duotine, manipulating Grace into betraying her sister and niece, and recruiting Remor, the prince of darkness, to be his mere lackey and to do his dirty work. His charm is not infallible, however, as Dr. Deern, Lucia Dagenhart and Fran seem to see right through Dr. Oswald's charm and ambition. 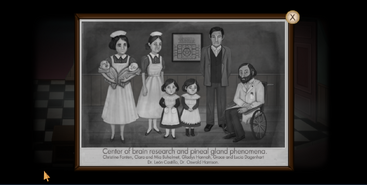 Add a photo to this gallery
Retrieved from "https://fran-bow.fandom.com/wiki/Dr._Oswald_Harrison?oldid=12356"
Community content is available under CC-BY-SA unless otherwise noted.