Clara and Mia Buhalmet are conjoined teenage twin girls that Fran Bow Dagenhart meets during Chapter 2: Part Two (Double Personality). They live in a tiny pink cottage on a remote island where they lure and kidnap toads and black cats. Upon meeting, the twins make a deal with Fran to make a special potion to help them separate their bodies, in exchange for her cat's life. However, Fran realizes that this would very likely end up killing her after she finds another unfortunate girl who attempted to make the potion. Her body still in the house in more than one piece. Instead of brewing the potion they requested, Fran finds a different recipe and makes a potion to redeem their souls.

Clara and Mia are identical twins that they look very similar, but the only physical difference between them is the mole under Clara's left eye.

The twins have shoulder-length brown hair and blue eyes. They wear a light blue-buttoned dress with, puffed striped sleeves, collar, a sheet white tulle skirt, a matching ribbon around their waist, knee-length light blue and white striped socks (similar to Fran Bow Dagenhart's) and black Mary Janes. They both wear ribbons in their hair to differentiate between each other:

Despite it being stated that the twins are very different from one another, they seem to have very similar ideas on what should be done in dire situations. It is later said that the difference between Mia and Clara is that: Mia was angry and Clara was sad... And this was because they both were mad (Chapter 4: Part 1 - "My Imaginary Friend"). In a letter found in their mirror above their (assumed) skeletons, they confess that they truly hated each other and couldn't stand to be attached to one another. They both also seemed very envious of one another and appeared to be vain as well, constantly comparing themselves in the mirror to see which of them was more charming. However, in the end, they could never decide who was the more charming one.

Clara and Mia have very girlish tastes as they love to wear makeup and perfume, brush their hair and dress up, based on what is seen in their room upstairs. They also have been shown to have a strange liking to somber-looking; toys, roses, and (especially dead) animals. They even decorate their whole room with roses and melted doll faces on the walls.

They have an affinity for witchcraft and (seemingly) baking as well. Their kitchen is filled with baking ingredients, and the table in their living room is covered with sweets. It is also implied through their dialogue with Fran that they see themselves as superior to her mind because they are much older than Fran, even calling her stupid several times throughout their conversation. While Fran Bow Dagenhart is passed out, the twins had her sleep in a bed meant for pets, wearing a cat hat, serving her raw meat and referring to her as "Beautiful Kitten". In addition, they are manipulative and cruel to Fran, at first pretending to care about the troubles she's been through, and even beckoning her to tell her story, before this kindness quickly subsides and they begin threatening Fran with Mr. Midnight's life instead of in order to achieve what they desire from her. It is made very clear that this is what they intended to do from the start.

Interestingly enough, they also seem to have a pet peeve when it comes to manners. For instance: if Fran is rude to them during their conversations, the twins will tell Fran that she's not allowed to talk to Mr. Midnight until they return. But, if Fran is friendly, the twins will allow her to speak with him while she waits for them to return. This shows that the twins value etiquette in others despite their own rude behavior.

Clara and Mia with a big scar in the middle, proof that they were stitched together. Notice the scar on each forehead, suggesting lobotomy as well.

Clara and Mia as babies being held by a nurse.
The twins I think.png
Clara and Mia at the asylum?
Mia and Clara pre siamese.png
The Twins before they were sewn together? 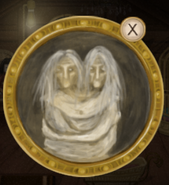 The twins as old? 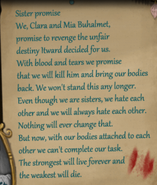 Clara and Mia's note to Fran. 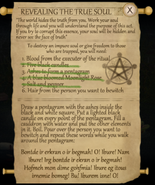 The Twin's Favorite Doll, a hidden achievement.
Fran and the Gemini baby.png
Gemini Baby; the twins as infants?
Fran and Clara and mia.png
Fran performing the "Revealing the True Soul" spell on the twins.

Clara and Mia in Itward's Ship.

ghost of the dead girl that tried the ritual.

The sisters as seen in the shadow theatre on Itward's ship.

Mia was angry and Clara was sad.

They blamed Itward and tried to kill him...

...but ended up killing each other instead.

Even in death, they blamed Itward and each other.

Sewn together just to see how their bodies would react.

The Twins
Add a photo to this gallery
Retrieved from "https://fran-bow.fandom.com/wiki/Clara_and_Mia_Buhalmet?oldid=12347"
Community content is available under CC-BY-SA unless otherwise noted.