Antonio the Greatest is an ant that lives in the forest. In his youth he used to be a trumpet player in a band called Jantzz aside The Queen of Meat and Luciano Myran.

Antonio is a giant old ant, with four feelers that are placed anthropomorphically. He has a white long beard, blue eyes and carries around what appears to be a walking stick.

He seems to be careless and a bit cold, as he fed a living creature to his beetlepig and suggested to kill his only friend, the beetlepig, when milder options may be available.

Though he still helps Fran when he learns of how much Mr. Midnight means to her, even if it meant killing his only friend.

Fran encounters Antonio the Greatest in the forest after escaping Oswald Asylum. During their conversation he will mistakenly inform her that he has caught Mr. Midnight and fed him to his friend Beetlepig. 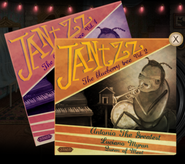 Antonio when he was younger playing in the band Jantzz.
Add a photo to this gallery
Retrieved from "https://fran-bow.fandom.com/wiki/Antonio_the_Greatest?oldid=12305"
Community content is available under CC-BY-SA unless otherwise noted.